Why do resolutions fail?

It’s that time of year.  We’re at the end of January and, if you’re still sticking with your resolutions, the honeymoon period is over and we’re about ready to slip, cheat, fail, whatever you prefer to call it.

But why? We’re almost at a month in, it’s meant to start getting easier isn’t it?  Why do resolutions, goals, good habits fail? 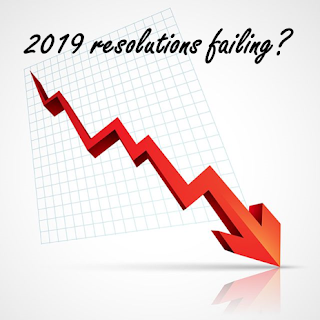 In the beginning of the resolution it’s still very much a novelty. New is easier.  New is different. It feels like everyone has a resolution and is either eating healthy, trying exercise, taking part in dry January etc, and it feels like support is everywhere.  Everyone is in this together.  Then one by one people start to give up, for whatever reason, and suddenly you are the only one.  If you’re anything like me, you’ll even have people encouraging you to just give up.

Don’t listen.  You know the old saying of misery loves company, well guilt and shame bring misery. Some feel bad that they have “failed” and to help ease their misery they want nothing more to be able to say “well so-and-so gave up too” as if it somehow absolves them from not being able to do what they set out to do.

Now is the time to dig in and really embed those habits.  You're nearly there on those resolutions/habits becoming something you no longer really need to think about.  We all have habits like this already, every day.  I don’t need to make a conscious decision to put the kettle on to make a coffee, or to clean my teeth, or put my shoes on to leave the house.  These are habits, long embedded since childhood, or in the case of coffee, since I fell in love with it mid-20-something.

All habits have a cycle.  We have the trigger, the routine, then the reward.  This applies to habits that are good for us, and the habits that are bad for us.  The difference between the two is how quickly the reward happens.

Let’s start with a bad habit.  Eating biscuits….  The trigger could be being bored or tired at work, the routine is wandering to the kitchen to get a drink and, in this case a second trigger, seeing the biscuit jar.  Now this is where the reward comes in.  This is where you need to choose.  Eat the biscuit, enjoy a brief moment, then feel a bit down because you ate a biscuit (or five, and then possibly pizza) or resist the biscuit, fight through your sugar cravings, and hopefully feel good later that you didn’t eat the biscuit and hopefully had a healthy dinner.

Or a good habit.  I love to run, but I still sometimes really struggle to get out the door, especially after another stint of being unwell.  It takes a while for it to get a bit easier, to notice a change in your appearance, to want to get out of bed in the morning instead of hitting the snooze button (bad habit – quick reward) and then we get bored.  We are not feeling rewarded in the same way that our bad habits reward us.

So how do we get past this and continue with our goals?  Perhaps adjust some triggers. I don’t buy anything I shouldn’t be eating, but it’s everywhere at work.  Can you move these so that you have to actively look for them, instead of staring at you and calling your name (just me?).  Tack one habit to another.  I have to feed my cat every morning, so I put my running kit next to her packet of food, I then have to choose to not go out (and it does happen). I used to leave the kit out upstairs, but then I’d have to go back up, and once I’d done that I would just get ready for work.  What are your current habits that you could attach something extra to?  Try thinking of it as a want to instead of a have to/ should do/ need to.

Turn the negative, to a positive.  Going to the gym or for a run, you get sweaty, it takes extra time to shower, dry your hair, etc., but how about looking at it as spending time with friends, or getting time to yourself?  I live by myself so the motivation of getting time away from people isn't effective for me, I get away from people by staying home, instead I consider it time I can get away from the devices that mean we can be forever switched on.

My other trick is the five minute rule.  You can do anything for five minutes. I can go out for a run for five minutes and if I hate it I'll turn back (I don't). I'll be meant to be running for 30 minutes, but I'm not feeling it after 20.  Just five more minutes.  Then it's only five minutes left, so I may as well run that anyway.  I now keep a stash of Rooibos tea, ginger and lemon, and a liquorice one in my drawer, when my sugar cravings hit I make a tea, give it five minutes and it usually deals with the craving. If it doesn't? Go for a wander and try another five.

Find a way to fall in love with boredom and have faith in yourself. Remember your why.  Why did you set this goal? Who are you doing it for? If you’re following a weight loss plan, running plan, or training plan, why did you choose this particular one? We are bombarded with information via social media and when we see someone else’s apparent success we compare it to our own, decide we are doing the wrong thing, and either switch or give up. Why are we so brilliant at being patient with others, yet terrible at it for ourselves.  Stick to the plan you chose, you chose it for a reason.

I’d love to hear how you’re getting on.